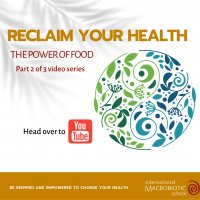 I want to talk a little about the power of food. It's been recognised for 1000s of years that food is a very powerful healer. And it's very powerful in keeping ourselves well. If we look around the world and ancient systems like ancient Greek medicine, Egyptian medicine etc they really understood that food was an essential part of health. And if people became ill, the main approach was to fast. If we look around the world, Vedic medicine, Chinese medicine, many parts of the world have an evolved system of medicine, understanding how food can both create illness, if we're eating unhealthy foods, or there's an unhealthy balance in our food, or can create wellness, and also can be very powerful in healing illness.

Strangely, in recent times in the in the West, we lost this understanding up until maybe just the last 20 or 30 years. So, 40 years ago, when I first got into studying macrobiotics, and the more alternative approaches to health, it was it was thought that food had nothing to do with health, whatever health problem you had, you could just eat whatever you like that food was not a part of causing illness or a part of healing illness. Then in the late 70s and in the 1980s, some studies started showing that eating a diet rich in animal fats was the primary cause of coronary heart disease. It was understood that the build up of fats in the heart was a cause of coronary heart disease, often leading to strokes as well. Being the main the biggest cause of illness and dying in Western culture at the time, this was a big revelation.

Then it took until the 1990s and the 2000s to start realising that cancer, which has greatly increased over the last 100 years, also, is primarily a diet and lifestyle cause illness. And first of all, looking at strong correlation between the large intestine, colon cancer, colorectal cancer and the amount of meat that people eat. There has also been a strong correlation between breast cancer and the amount of animal fats that women eat, for example. Now it's being understood that certain dietary factors can really promote cancers and it’s becoming more widely known and accepted that food also has a big effect on other health problems. It is becoming more and more evident that eating a balanced plant based diet is the way to go.

Diabetes was thought to be just something that happened to people, now it's being recognised as being primarily diet and lifestyle caused. Back in the 1980s macrobiotics, which was just so far ahead of its time, Michio Kushi, a leading teacher of macrobiotics wrote his book in the 1980s on the cancer prevention diet. He was already looking at how different foods contribute to different kinds of cancer, and how we can use food to prevent cancer, and in some cases also help with the healing of cancer. It was the same with diabetes. Macrobiotics understood how food was a primary cause and how eating a plant based diet could also can be used to help heal some cases of type two diabetes.

It is amazing that this has now come into the mainstream just in the last few years and even doctors and Western medicine are recognising more and more the impact that our diet can have on our health. It is really coming to the fore now that food is really probably the biggest thing that determines whether we're healthy or whether we become sick, and there’s an increase in evidence that suggests that eating a plant based diet is what will keep us healthy.

Our history with food

In the 1980s there was a kind of standard British modern diet with a lot of meat, dairy, sugar, a lot of processed foods and are a little whole foods. And so it's very easy to see what needs to happen. We need to transition to a more balanced plant based diet.

Now there are so many different theories, and it's getting very confusing, should we be eating carbohydrates should we not be eating carbohydrates? Most people think it's great to eat whole grains. And this is what we've been eating for 1000s of years, and a lot of people are getting a lot of good health from eating whole grains. But there's a movement that eating carbohydrates is bad for us. So it's getting very confusing. And actually, I find that the principles of macrobiotics, which are really rooted in old traditions, very, very useful at this time for cutting through, you could say a lot of the crap, and a lot of the ideas which maybe hold some truth, but people think that they apply to everybody all the time.

What we need is a flexible approach to understanding the relationship between food and health. So thank goodness, there is a general consensus. One way we could understand this is with what's what is promoted now by the National Health Service in the UK. It advises that we should all be eating roughly 1/3 complex carbohydrate from whole grains and products 1/3 vegetables and fruit. Then we need some foods which are higher in protein, which traditionally have been thought of as being meat. The trouble is with meat is that it comes with a lot of fat. So, it's not the best source of protein and not to be eaten a lot of so eating more beans and pulses is now advised. They also recommend two portions of sustainable fish a week, and eat less meat and especially processed meats, which have been shown to contain a lot of chemicals which promote cancer.

It was thought that dairy was essential for health to give us calcium. Now, it's been acknowledged that dairy food is not essential for health, and actually, the majority of the world's population do not eat dairy foods on a regular basis and often experience very good health and don't suffer from calcium deficiency or more osteoporosis. So this is now being acknowledged in the latest NHS guidelines. So that it has this little section for dairy alternatives such as plant milks, soy creams, oat creams, etc. And then a small section for oils, high sugar foods, high salt foods etc.

Good for the environment

Plant based eating is also being realised that it'd be really a really good idea for us nationally and internationally to move to more plant based way of eating because of the effects on our environment. One of the most warming chemicals go into the atmosphere is methane. We know about a lot about carbon dioxide which comes from cars and other sources from burning fossil fuels for energy and but another big source is methane. And the main source of methane is certain agricultural practices. use of fertilisers and especially raising animals because Because animals’ ruminants give off a lot of methane. When they're breaking down plant matter, which is very difficult to break down with the help of bacteria and microorganisms in their gut, they produce a lot of methane. So the more animals we have, the more methane we produce. And that's a major contributor, maybe as much as 20% of global warming is caused by methane production. So going on to plant based diet would really help slow down global warming.

To learn more about a macrobiotic approach includes the yin and yang of foods and the different effects food have on our bodies, check out the full video here: